For Sale
For Rent

The Increasingly Bad Ideas That Doomed The Atrium Mall

Construction crews have finally done what 25 years of marketing could not: Make people notice the Atrium Mall. As the workers clear away Chestnut Hill’s white elephant of commerce, what went wrong? A lot. Mall developers promised The Atrium would provide a high-end shopping experience for the toniest zip codes in Massachusetts.

It turns out even rich people need a reason to shop at your mall, be it ample parking, anchor stores, or a shopper-friendly experience. And according to shoppers interviewed by the Boston Globe over the years, The Atrium met none of those basic needs.

What it tried to do instead was focus on brass, marble, stucco, and high-end service — in short, showmanship.

In 1989, The Boston Globe offered descriptions of the newest entrant on the mall scene:

“Atrium Mall shoppers will be among the most pampered, coddled, petted and patted of consumers. They will be greeted at the front door by a doorman in a custom-made uniform, who will lead them either to the valet parking or to the coat and package checkroom … A roving security vehicle patrols the parking area, and its driver, like everyone else in the building, has been trained to be personable and to cater to the customer.’’

That was the plan, anyway. But the best-laid schemes of mice and well, mall developers, often go awry. 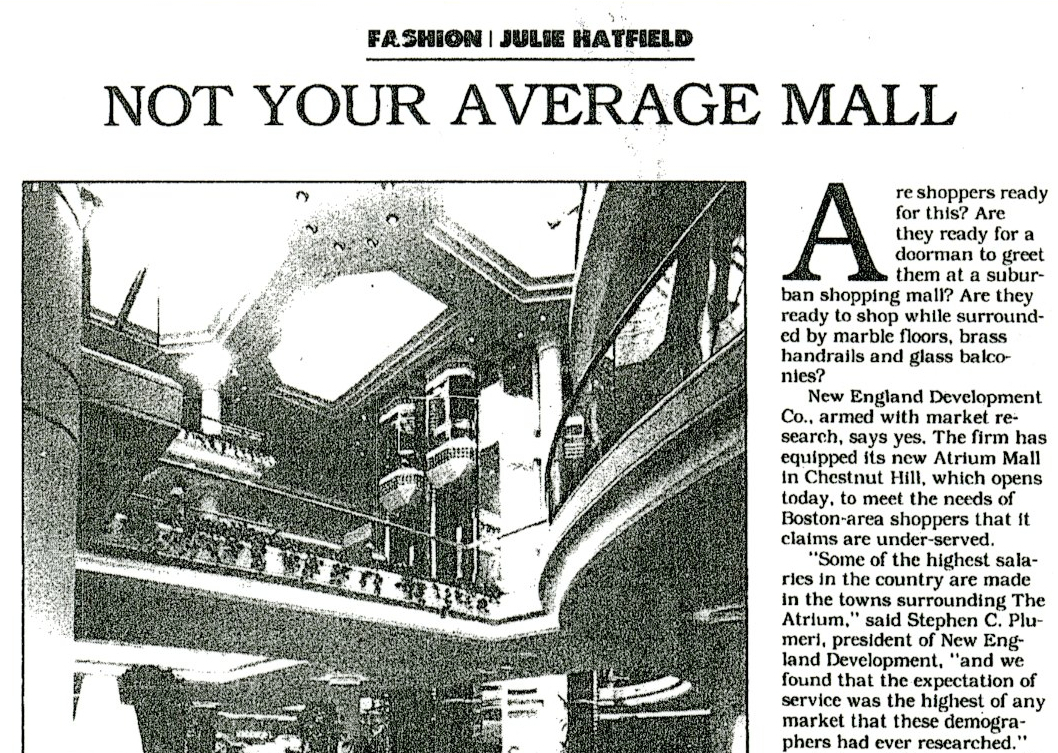 1989: Once we finally get some stores, rich people will love our mall!

Having failed to woo Nordstrom with his glass-and-stucco plan for a compact, top-tier facility, Atrium developer Steve Karp decided to try a new model. He designed the mall with no anchor stores, opting instead to use the glitz and name recognition of high-end boutiques to try and lure a classier clutch of shoppers than the hoi polloi drawn to The Mall at Chestnut Hill across Route 9. At first, the new plan seemed to work, with famed boutique Henri Bendel signing on to lease space in the mall.

But when Bendel’s — the marquee shop touted to prospective shoppers — delayed its ribbon-cutting by nearly a year, other shops balked at opening, too. The result was a mall half-empty for its first holiday shopping season.

The Boston Globe continued to document the mall’s progress, or lack thereof:

Letting it sit there unopened was unthinkable, so Karp disguised the empty spaces as best he could and opened with about half the mall filled … When Bendel* opens, The Atrium can aggressively advertise a local branch of an exclusive New York fashion landmark, the only one north of Manhattan. The other stores are pleasant, but only Bendel will create excitement and draw the wealthy spenders.

(* Those in the know actually refer to Henri Bendel as ‘Bendel’s’.) 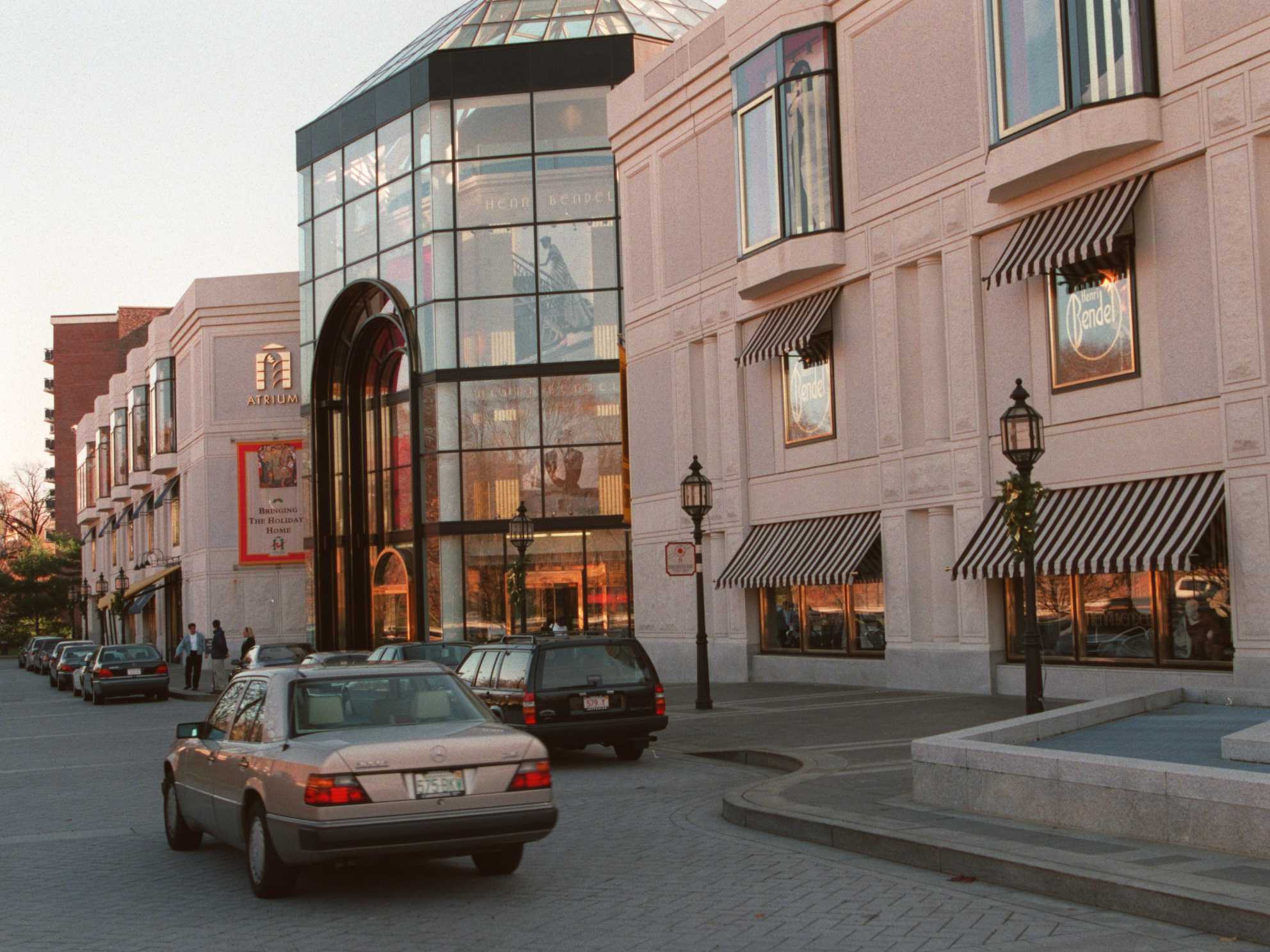 Flash forward five years, and The Atrium still hadn’t recovered from its disastrous opening. Even worse, the public’s negative perception of the place had hardened. The mall, positioned as a high-end oasis for fashionistas and deep-pocketed MetroWest consumers, was described as a gaudy, inaccessible fortress by what few customers it had. “It looked like a Miami Beach hotel without the beach,’’ according to a December 1994 Boston Globe article.

What do you do when people hate how your mall looks? Add some awnings! Karp laid out $10 million for cosmetic improvements to the mall, including awnings and more windows to make the space seem more inviting from the outside.

Karp told the Globe he thought the changes would “soften The Atrium’s glitzy and threatening look.’’

But you can’t buy loyalty, and The Atrium’s main competition had that in spades. It was also starting to lure some of the higher-end retail outlets Atrium crowed about but couldn’t always deliver.

The 1994 report from The Boston Globe provided a perfect snapshot of the two rival malls, commenting on “a tuxedoed pianist played to an audience of no one’’ in “an otherwise empty imported marble walkway’’ at The Atrium.

Meanwhile, across Route 9 at The Mall at Chestnut Hill:

Consider, for example, Barbara Lee and Inez Burgin, as they hunker down in a cafe in The Mall at Chestnut Hill on a recent morning. The two 70ish friends from Brookline are extolling the virtues of all they encounter here: the expansive blacktop outside, the muted natural light inside and the reassuring comforts of such stores as Talbots and Rodier Paris.

Karp told the Globe: “We got confused ourselves, and then we confused the customer.’’ 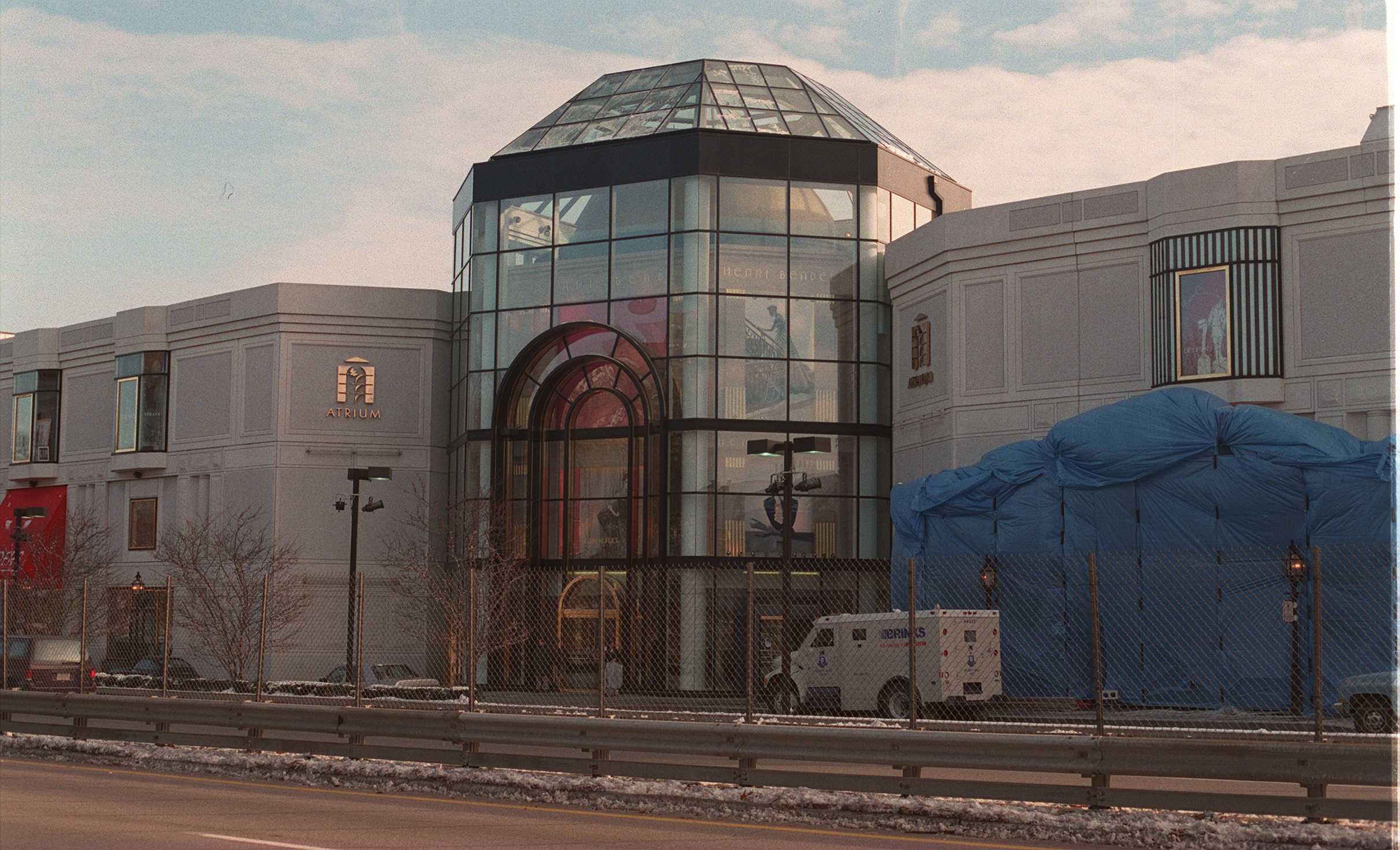 1996: The Cheesecake Factory will save our mall!

Early Globe pieces had called The Atrium’s “lack of an anchor store’’ a “serious drawback.’’ Maybe shoppers don’t want to go to a mall without a big anchor store. But they’ve got to eat, right? By year seven, The Atrium had shifted focus again, this time luring national restaurant behemoth The Cheesecake Factory and local Asian restaurant chain Jae’s Cafe as “anchor restaurants’’ The Atrium hoped would give shoppers a reason to storm the retail fortress.

After eating, the diner-shopper set were waved toward the mall’s newest tenants, which included middlebrow stores that had slowly begun to replace some of the higher-end shops.

The Atrium of the late 1990’s featured a smaller Henri Bendel store, along with Abercrombie & Fitch, Pottery Barn, and Borders Books and Music. An expanded Williams-Sonoma also opened. Maybe the new “anchor restaurants’’ would prompt shoppers to splurge on new cookware.

The Globe reported on the increased Williams-Sonoma presence:

In space once occupied by a shop selling Ted Williams memorabilia, quasi-celebrity chefs put on demonstrations of how to craft the toniest of pasta salads. 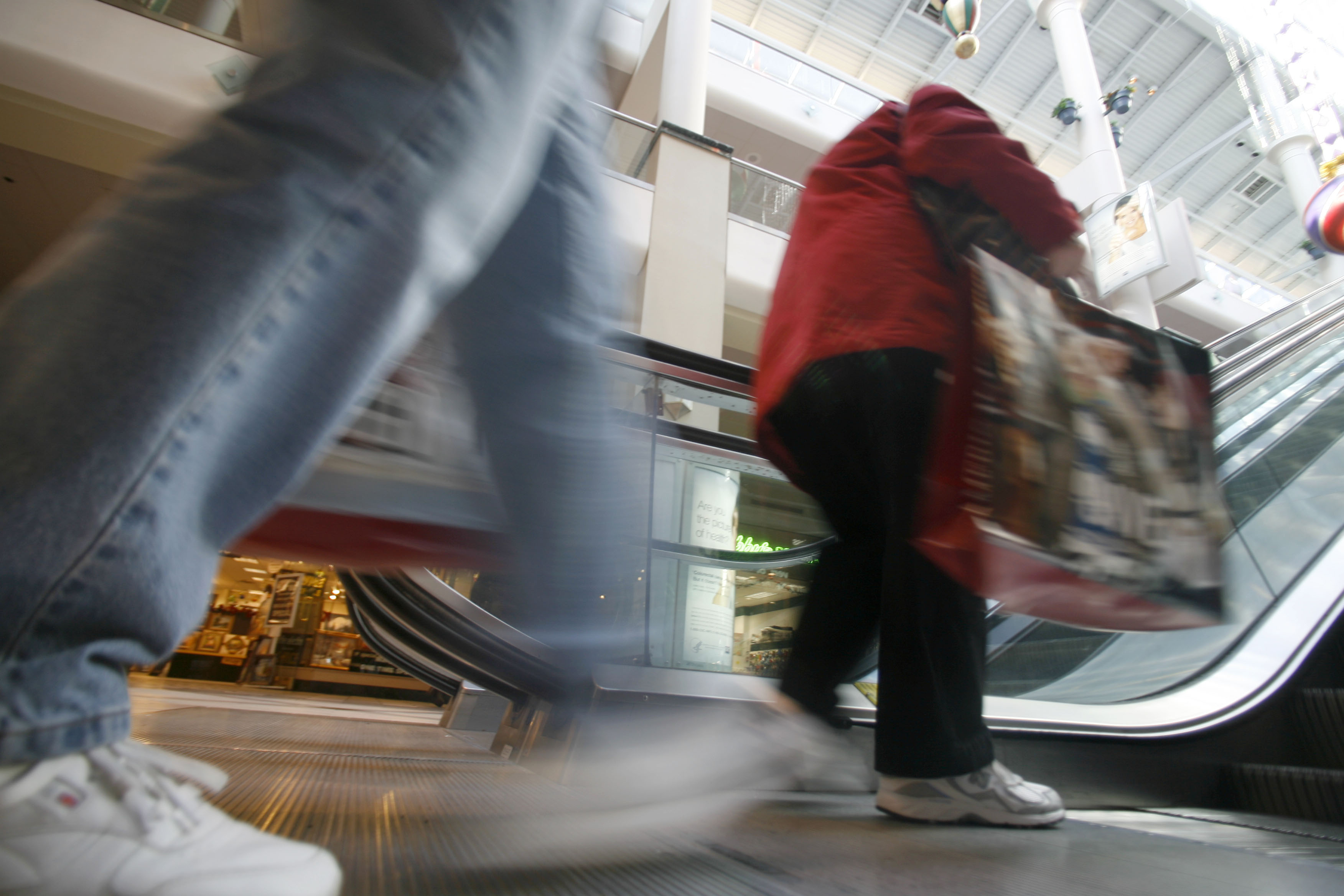 In 1999, Karp had sold The Atrium and 13 other malls to Simon Property Group in a $1.75 billion deal. It wasn’t long until the gigantic mall operator hatched its own idea to save The Atrium. 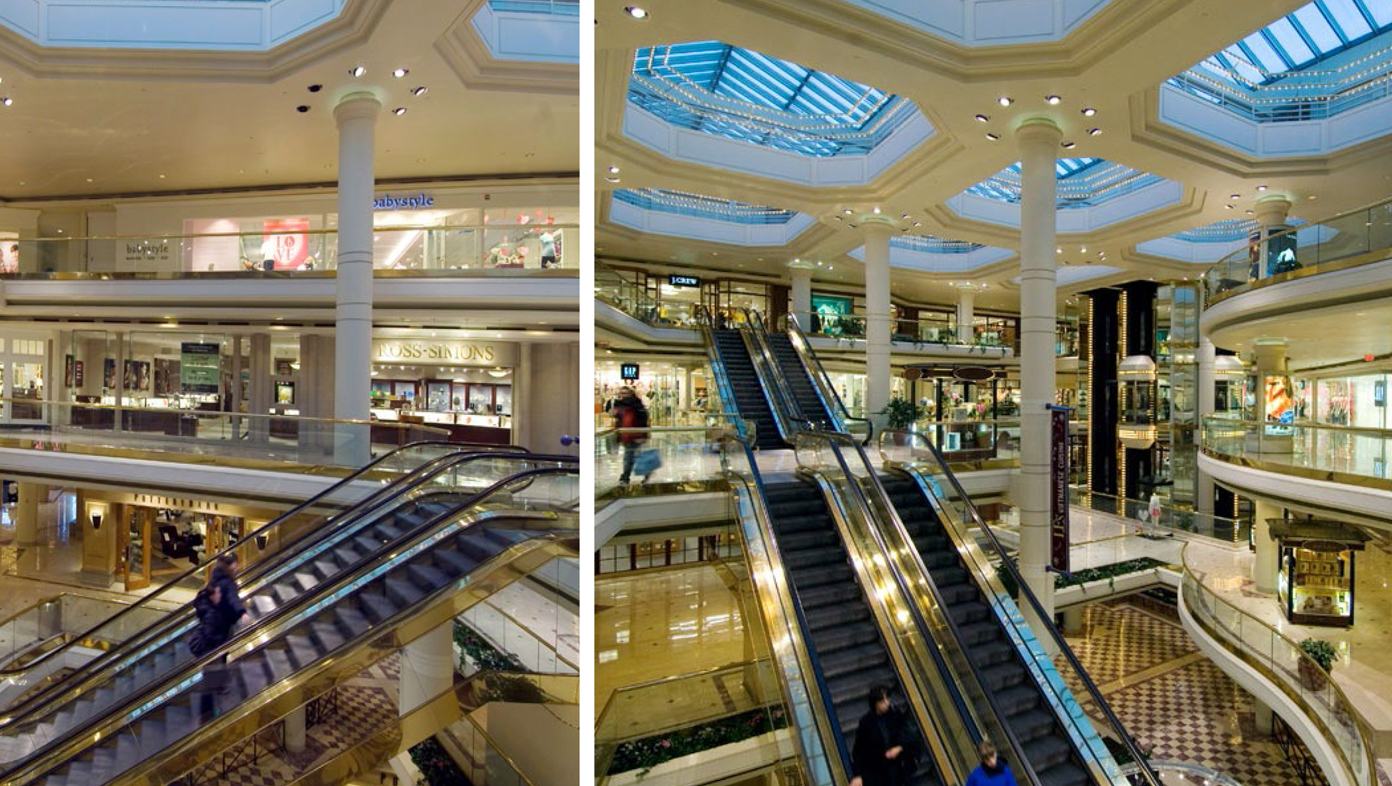 By 2001, Simon decided that it could attract more shoppers by appealing to children. And not just any children. “Upscale children,’’ as described by The Boston Globe. If mommy and daddy had a platinum credit card, The Atrium wanted their business.

To achieve that end, The Atrium invited rugrat-focused retailers like Baby Gap and Pottery Barn Kids. Because nothing gets the knee-pants set worked up like a pricey wicker laundry basket to hold their soiled miniature designer jeans.

Today The Atrium wants to be known as a shopping center that can also serve as a destination mall for upscale children. “We’ve done a good job of taking care of mom and dad,’’ said Atrium manager Robert A. Wodogaza. “Now we can be a destination for children’s shopping too.’’ 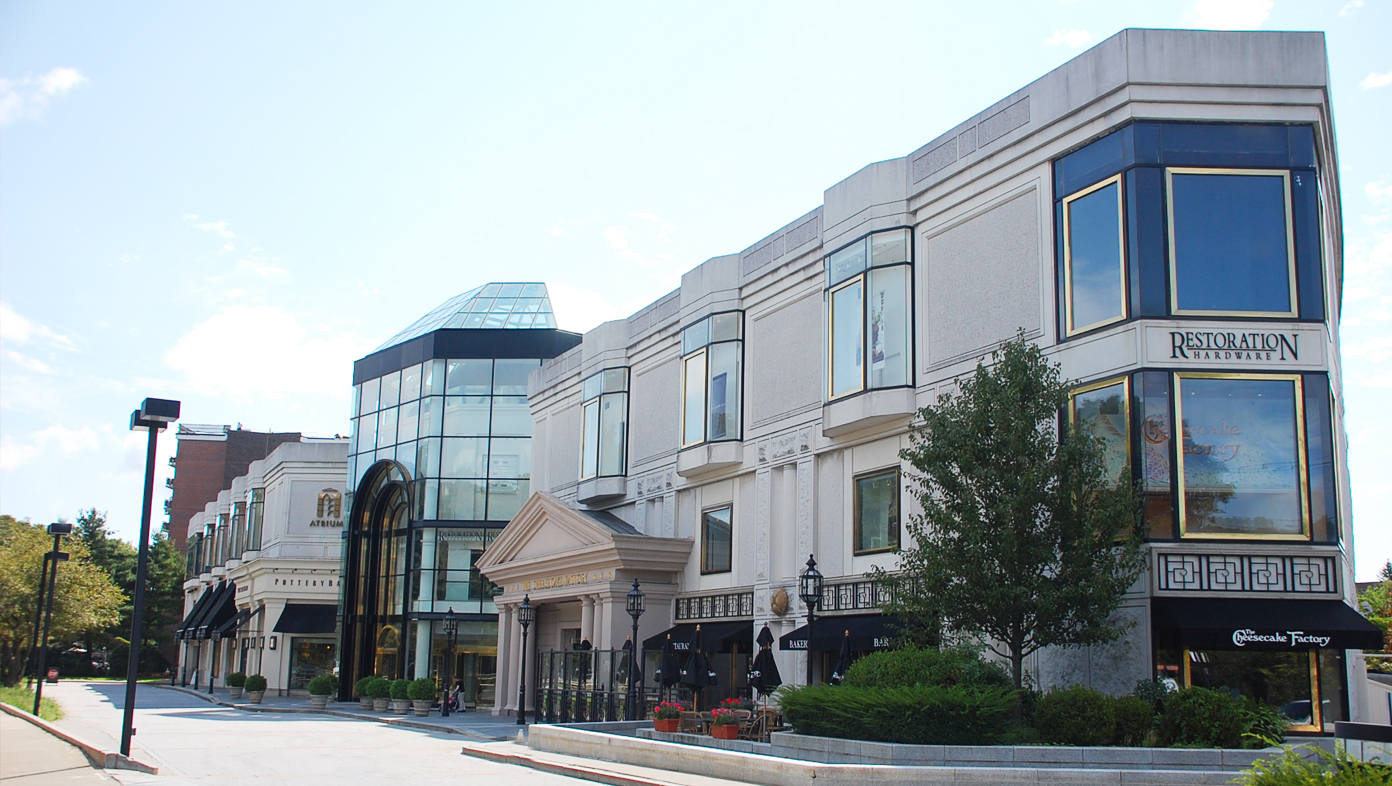 Eleven years into its Atrium adventure, Simon Properties wanted out. By 2010, the company — which made its fortune owning and operating upscale malls — was looking for a buyer.

In the meantime, they were getting creative to try and fill some of the vacant space in the mall. The Atrium was the Boston-area home for “Bodies Human: Anatomy in Motion,’’ a controversial science exhibit that displayed the bodies of real people, skinned and sometimes cut in half to display their inner workings. That exhibit was located next to Pottery Barn Kids. Educational for the upscale children!

After 21 years of failing to find a niche with the old swells and new money in Boston’s MetroWest suburbs, The Atrium’s owners watched as other malls filled that slot. The Mall at Chestnut Hill, which Karp insisted didn’t provide the upscale shopping experience the area deserved, was doing great with Bloomingdale’s and other swanky shopping destinations. And with Dedham’s Legacy Place to the south and Natick Collection to the west, the deepest consumer pockets had newer, bigger, and more convenient places to shop.

It was enough competition to have the last major retailers bail on The Atrium. “Major tenants’’ like Abercrombie & Fitch and Williams-Sonoma had bowed out. And it didn’t stop there.

The end is also near for one of the mall’s most stable fixtures – the 25,600-square-foot Borders complex that includes a sit-down cafe, and represents more than 10 percent of The Atrium’s 225,000 square feet of space. 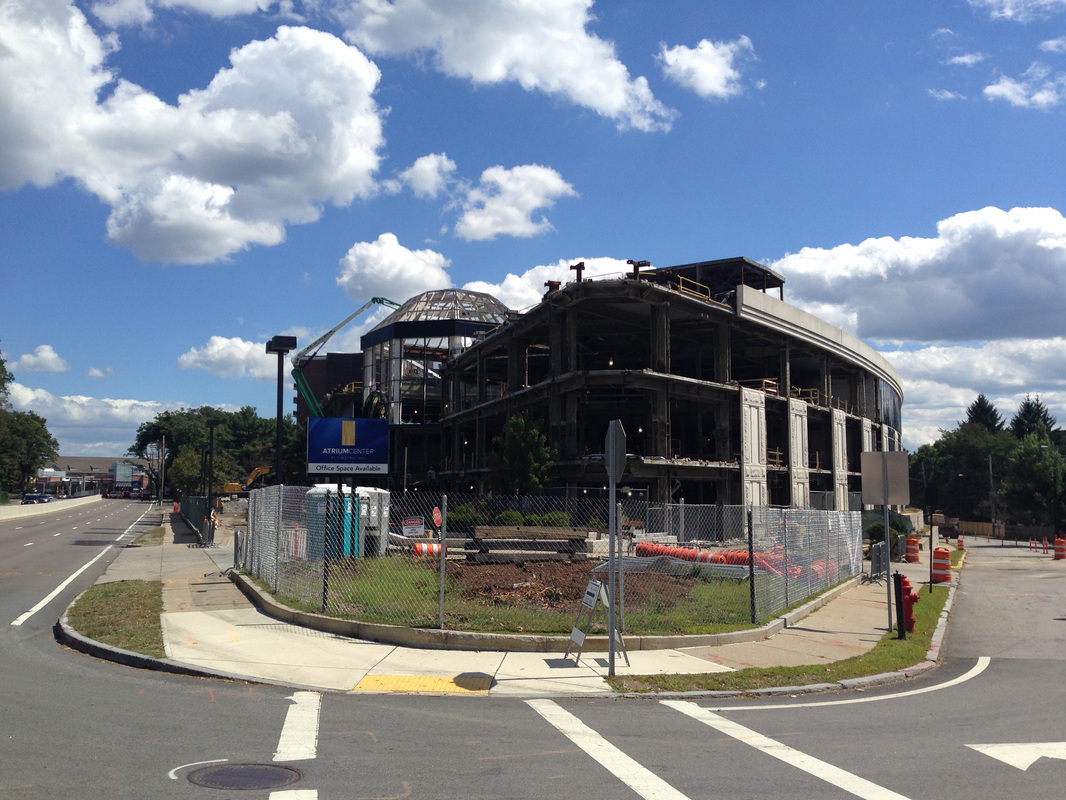 In June 2012, The Cheesecake Factory announced plans to decamp from The Atrium for a better location — in The Mall at Chestnut Hill. The next month, Simon sold The Atrium to Needham’s Bullfinch Companies for $46 million.

The development firm is gutting and reskinning the old fortress to build office space. Mike Wilcox, Bullfinch’s vice president and director of leasing, told Boston.com the exterior of the new ‘Atrium Center’ is expected to be completed by early 2015.

“The only thing that’s going to exist that currently exists is the atrium itself,’’ he said, referring to the building’s glass ceiling.

The new ‘Atrium Center’ will include some retail space, but the main focus will be on adding tenant companies that value their workforce, according to Richards. Bullfinch believes the restaurants and amenities in Chestnut Hill rival those in the Back Bay.

Richards is optimistic about The Atrium’s latest rebirth: “We really see this as a trophy suburban location.’’

Will this reinvention work? Only time will tell. 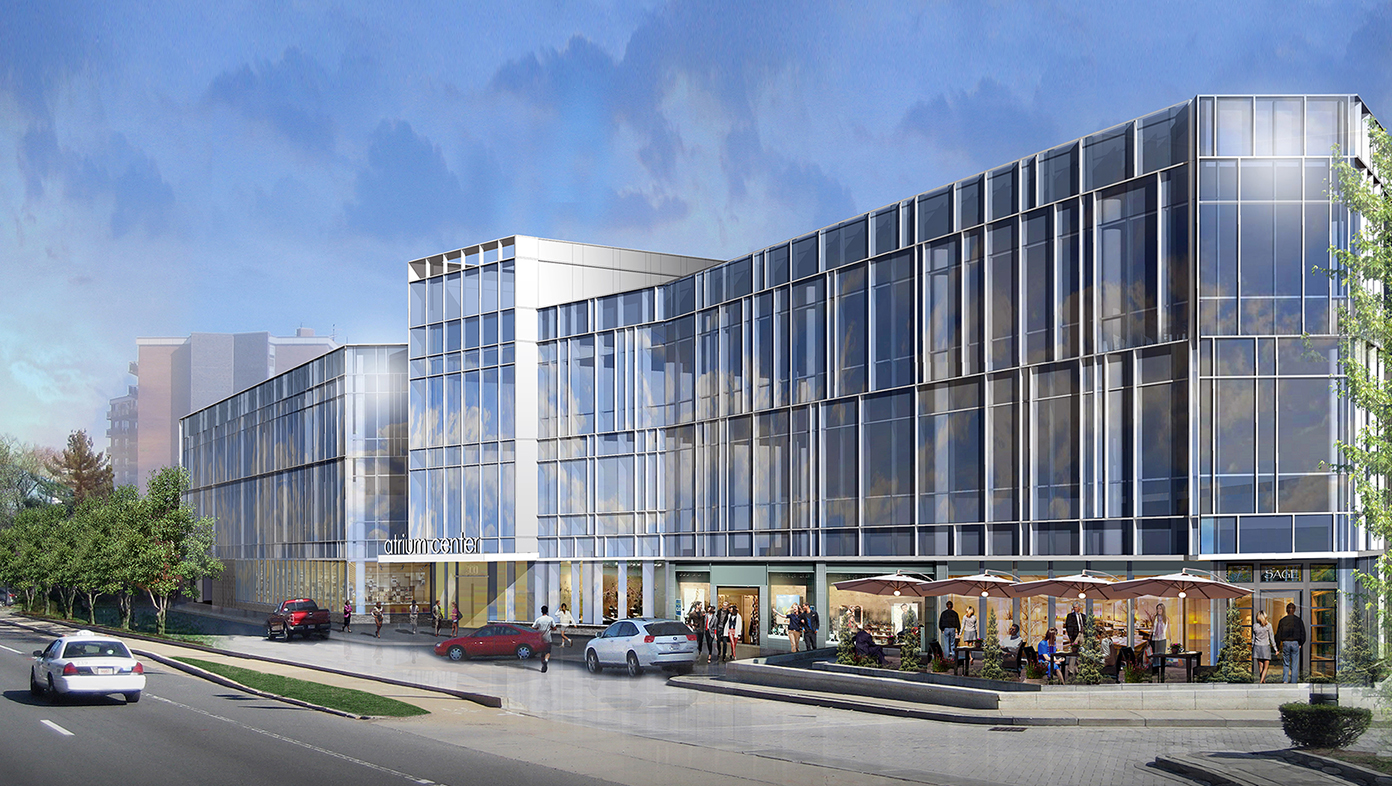 Above: Rendering of the exterior of ‘Atrium Center.’